The Pilgrimage of Life

Hear about Shoaib’s journey of faith that brought him to seek Christ in the Holy Land.

The Pilgrimage of Life

Growing up my prayers consisted of daily rituals reciting passages out of scripture while kneeling, bowing, and prostrating towards the east. Mind you this was to occur five times a day and I, being lazy like most adolescents, missed a few here and there. Our prayers and our lives were oriented toward Mecca. Although I had a rebellious period in my Islamic youth, one thing was certain: a day would come where I would take a glorious pilgrimage alongside hundreds of thousands of Muslim pilgrims from all four corners of the globe to the holiest site in Islam, Masjid al-Haram, aka Mecca. That was the plan I had for my life, but it ended up not being God’s plan. You see, during college I had a conversion that led me, rather unexpectedly, into the Catholic Church, and my life changed forever. The most glorious pilgrimage I have ever taken was to the Holy Land, and not to visit the Dome of the Rock or other Islamic sites, but to walk in the footsteps of my Lord and Savior; in the footsteps of a man named Jesus of Nazareth.

Truly there is something special about going on pilgrimage, for any person of any faith. For me it’s a physical expression of an internal desire to grow deeper in faith and love for God. When the opportunity arose to go on pilgrimage to the Holy Land with my parish and campus ministry, I immediately signed up!

We landed in Tel Aviv, Israel. You could tell by the facial expressions of all the pilgrims that the long and tedious flight was not enough to hold the fire of the Spirit back from what was to take place over the next 10 days. Unfortunately, I had minor distress stirring in my heart for I had one battle to face before my pilgrimage could begin, the airport customs. To paint a general picture, the Israeli state is not on good terms with some middle-eastern countries. Regardless of being born and raised in the USA and wielding my navy passport with a proud eagle stamped on the front, my family name was going to be an immediate red flag. “Sir where is your father from?” the customs agent asked. “Afghanistan” I hesitantly replied. “Okay, thank you sir please have seat in that area” pointing to a forsaken corner full of empty chairs. This is where my pilgrimage begins. It goes without saying that Christ was persecuted much worse, but those three hours of unnecessary questioning was a cross I was proud to bear. 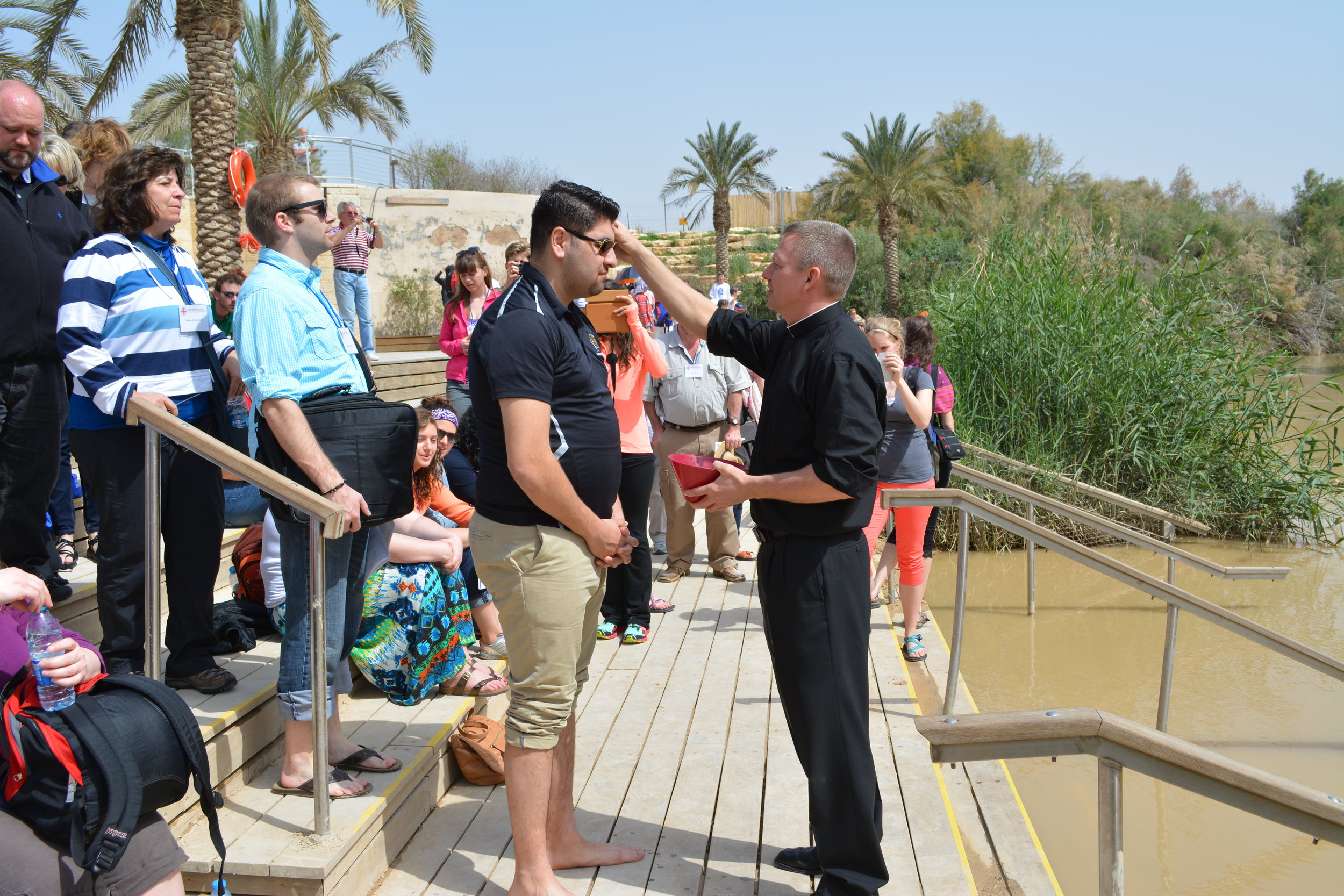 Shoaib renewing his Baptismal vows in the Jordan River.

Along with two others who arrived late, the three of us reconvened with the larger group of pilgrims in Bethlehem. Everything suddenly became real. Upon arriving at the site of the manger, I had to pause for a double take. The Lord had shown me something truly beautiful. There was a swarm of people from all different ethnic backgrounds from all four corners of the earth. Christians from India, Africa, east Asia and North/South America all coming together in joyful adoration at the birth site of our Lord. It was in that moment that I truly saw and appreciated the universality of the Church; how God is moving in different parts of the globe and bringing them the promise of the Holy Spirit. This did not go unnoticed throughout the rest of the pilgrimage.

You know how your imagination brings things to life in your head while you’re reading a story? I’m sure you’ve applied it to sacred scripture and prayed with those images (can you say Ignation Contemplation?). I chose this as one of my prayer forms in the months leading up to the trip, just to get myself prepared. Most of the passages took place in Galilee – the site of the Sermon on the Mount being one of them. Being there in person was moving, primarily because of my relationship with the Beatitudes, via Blessed Pier Giorgio Frassati, aka The Man of Beatitudes. Here I was reading this very scripture again, on this once obscure Galilean mountain that I had been envisioning in my head for months prior, and only thing to do was to let my emotions run free. In my moments of reflection I could hear his voice constantly telling me “Blessed are you.” We are all children of God and as children we’re always seeking that affirmation from a loving Father. There it was, I’d received it. This site was tranquil, and in that moment witnessing the grandeur of God’s creation on hike from the Mount of Beatitudes to the shores of the Sea of Galilee was beyond anything I had imagined. 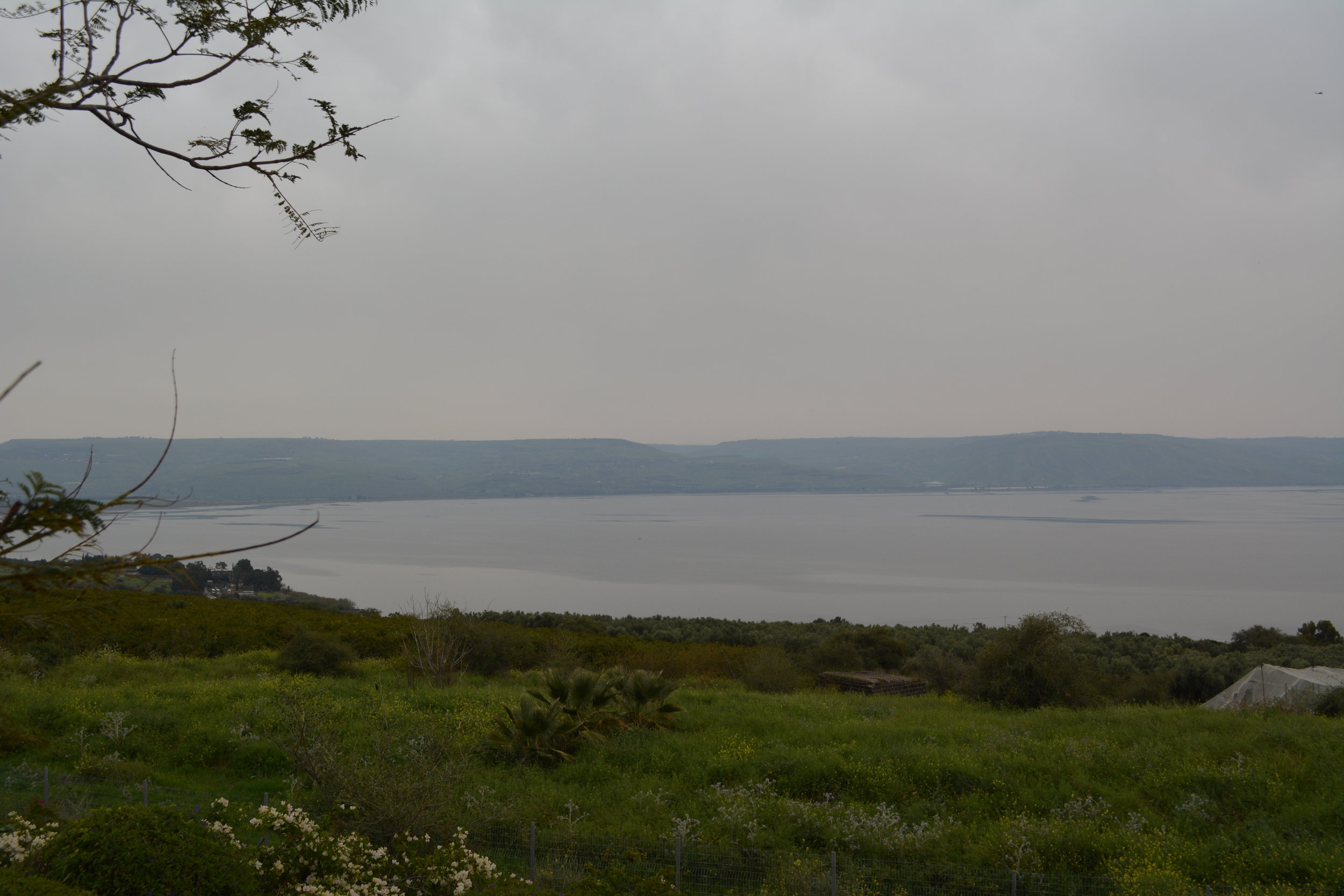 There was much to do in Jerusalem; it felt that time was against us. My heart was heavy once again. I gazed upon the Dome of the Rock for the first time, and my heart broke for the Muslim people. I so desperately wanted them to know the beauty of the risen Lord. On the eve of the last day of the pilgrimage we were blessed to pray a holy hour in Gethsemane at the sight of the agony in the garden, where Jesus was betrayed and arrested. (Side note – the trees in the garden are amazing! They are believed to be over 2000 years old.) During this time of prayer, I was once again reminded of the beauty that comes with a universal church. We were all brethren, shoulder to shoulder praying and worshipping our creator. Borders were meaningless in that moment, conflicts were a thing of the past and the communal life was ever present. As Jesus in the Blessed Sacrament was being reposed, we processed through the Garden of Gethsemane singing the same song in the same tune but in our own respective languages. “Jesus, remember me when you come into your kingdom…” While there were multiple languages singing that hymn, we concluded the evening back in the church singing Salve Regina together in Latin, unified in spirit and voice. Not a dry eye was left, every heart lifted, and every pilgrim filled with the spirit. If that’s not beauty, I don’t know what is. 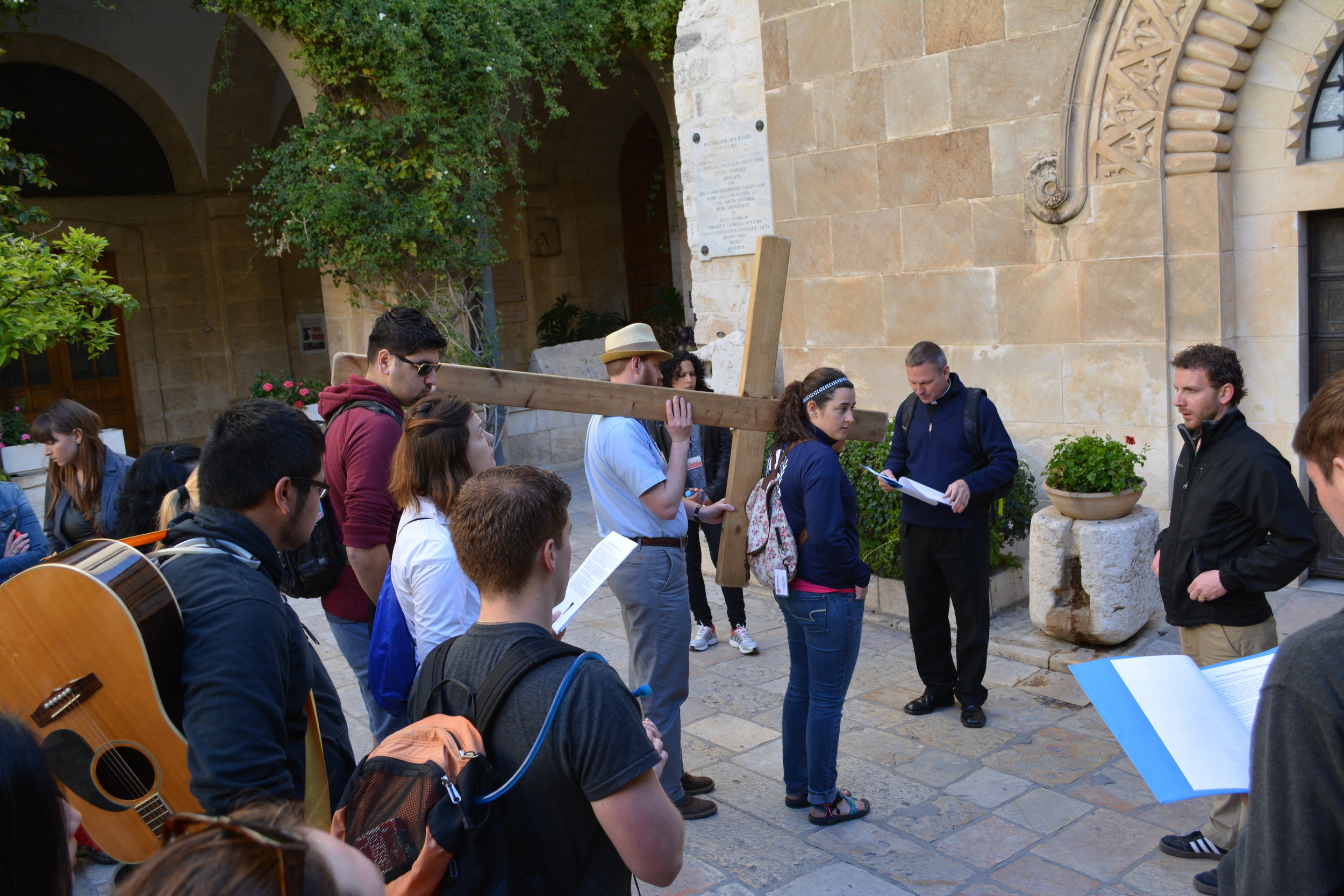 Pilgrims walking the Via Dolorosa in Jerusalem

Christ Jesus revealed himself to us on this trip in different manifestations. For me it was through the witness of my fellow pilgrims of our group and beyond. For others it could have been through the magnificence of His creation. At the end of the day I believe the Lord invites us to encounter him in his holy places and for the Holy Land I pray that you are able to ask the question, not “Should I go?”, but rather “Lord, when can I come and see?”

Shoaibullah Rasouli works in Indianapolis where he lives with his wife Lindsey. 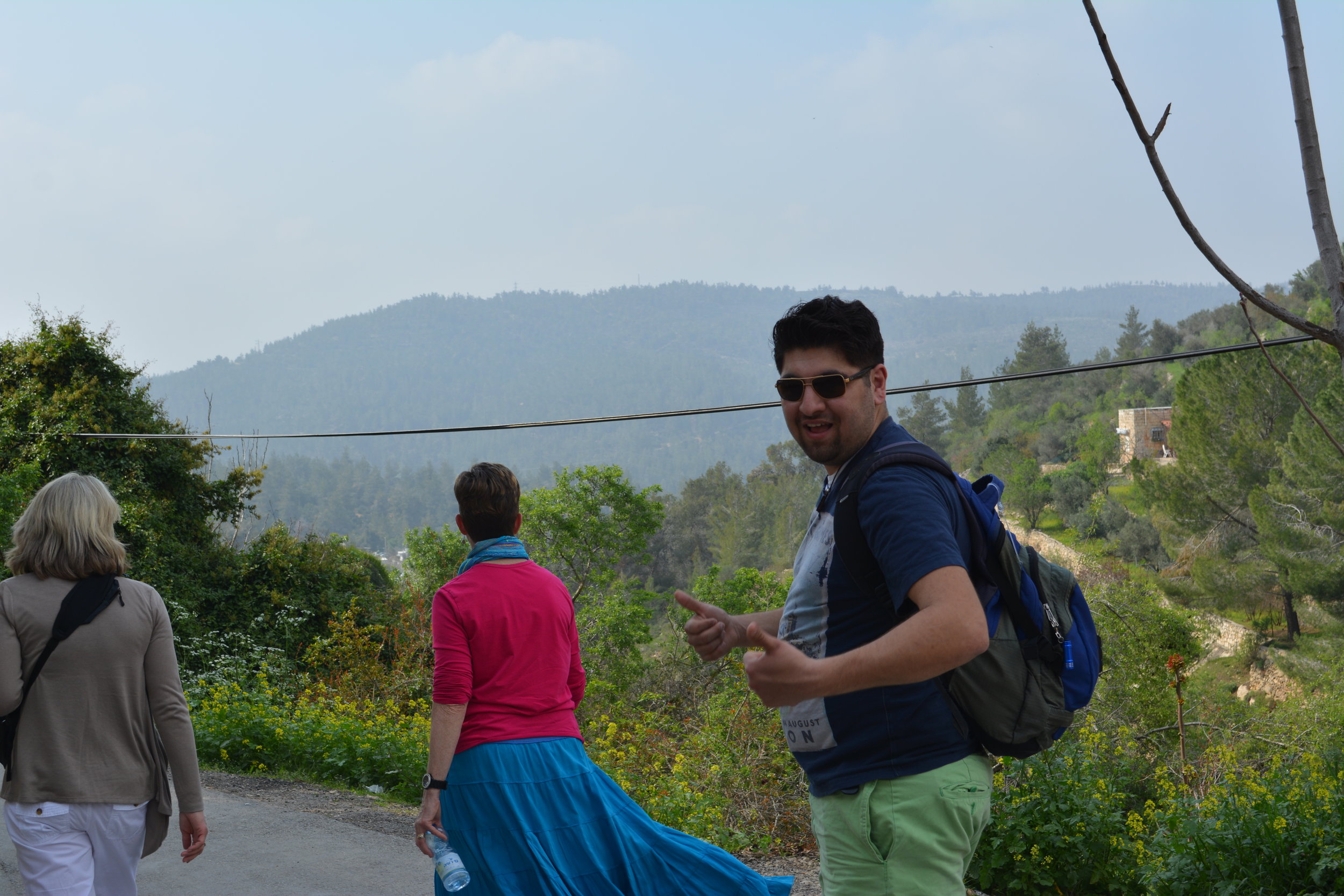