France is home to some of the world's most beautiful and iconic churches. Here are a few of our must-see pilgrimage churches in France...

Though Sainte-Chapelle is no longer used as a church, and the Eucharist is no longer reserved in its tabernacle, I’d argue it’s one of the most beautiful buildings in France. A closer look at the stained glass windows is an education in the original purpose of stained glass–to lift the mind and heart up to God and give the laity, who were often illiterate, a chance to learn about the life of Christ and the lives of the saints. 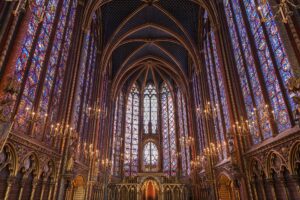 ame in Paris, Sainte-Chapelle was originally a chapel reserved for the royal family and their courtiers. Advances in architecture allowed three of the chapel’s four walls to be composed almost entirely of stained glass windows while still supporting the weight of the ceiling. The ceiling, a series of vaulted arches painted to mimic the night sky, seems to almost disappear on a sunny day when the light shines through the windows.

Walking into Sainte-Chapelle is at once a very embodied and very spiritual experience. On a sunny day the light shining through the windows will paint the floor–and the people inside the chapel–with the scenes depicted in the stained glass, reminding us the Christ is the Light of the world.

Notre Dame is perhaps one of the most recognizable churches in the world, with its unique silhouette, famous rose window, and Disney appearances. Sitting in the heart of Paris, it’s a common tourist attraction–or was, before it caught fire in April of 2019. Although the structure was saved, much of the interior of the church was damaged. While reconstruction efforts are ongoing, a visit to Notre 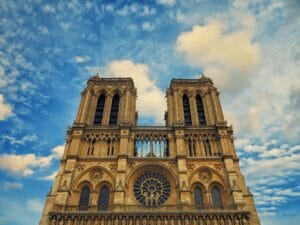 Dame now can include the walk up to the cathedral and a stop in the square in front of it, renamed in 2006 to celebrate the life of St. John Paul II.

In some ways, what Notre Dame symbolizes is the repeated commitment to God of the people of France–and indeed, the people of the whole world. Built in the 13th century, the cathedral has been on the brink of destruction multiple times. Victor Hugo’s famous novel, The Hunchback of Notre Dame, helped move the public to value its gothic architecture and fund a restoration effort. Centuries later, the world came together again as firefighters fought to preserve the church.

Even in a world that is increasingly secular, there is something about Notre Dame that captures people’s imaginations. It’s an important part of the heart of France and much of the Western world, and repeated restoration efforts over the centuries highlight that. With that in mind it’s easy to see how God uses history and tradition to show his work in our lives–making them beautiful and making all things new.

The cathedral at Chartres showcases many of the architectural elements that are distinctive to Gothic churches–its intricate stonework and flying buttresses are so well-preserved that the cathedral is a UNESCO world heritage site. Built in the late 12th and early 13th centuries, the cathedral has most of its original windows and has only undergone minor architectural changes. It has also been a pilgrimage destination for centuries. In some ways stepping into the cathedral must feel like taking a step backwards in time. 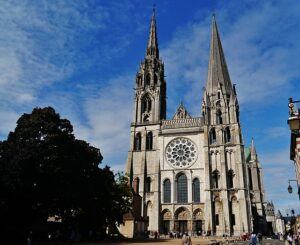 tinctive feature in the cathedral is the labyrinth pattern set into the stone in the nave, or the central part of the church. Intended to symbolize the long winding path to salvation, the labyrinth path has only one continuous path through it. Unlike a maze, there aren’t wrong turns or dead ends, only progress forward, even if it doesn’t always seem that way.

In some ways the labyrinth, like the cathedral itself, showcases the importance of trust. The labyrinth’s winding and unpredictable path requires faith that as long as we walk with Christ we are walking in the right direction. The cathedral itself, built over generations, was an act of faith that gave glory to God, as the builders who planned and began the construction most likely did not see it finished. Instead they trusted, like we all must, that God was guiding their work and would not let it go unfinished.

Would you like to explore these beautiful churches in person? Join us for one of our upcoming departures to France and experience their beauty for yourself!

Did you enjoy this post? Here is some further recommended reading:

Becoming the Best Version of Yourself Through Pilgrimage

3 Reasons Your Catholic Parish Should Go on a Pilgrimage